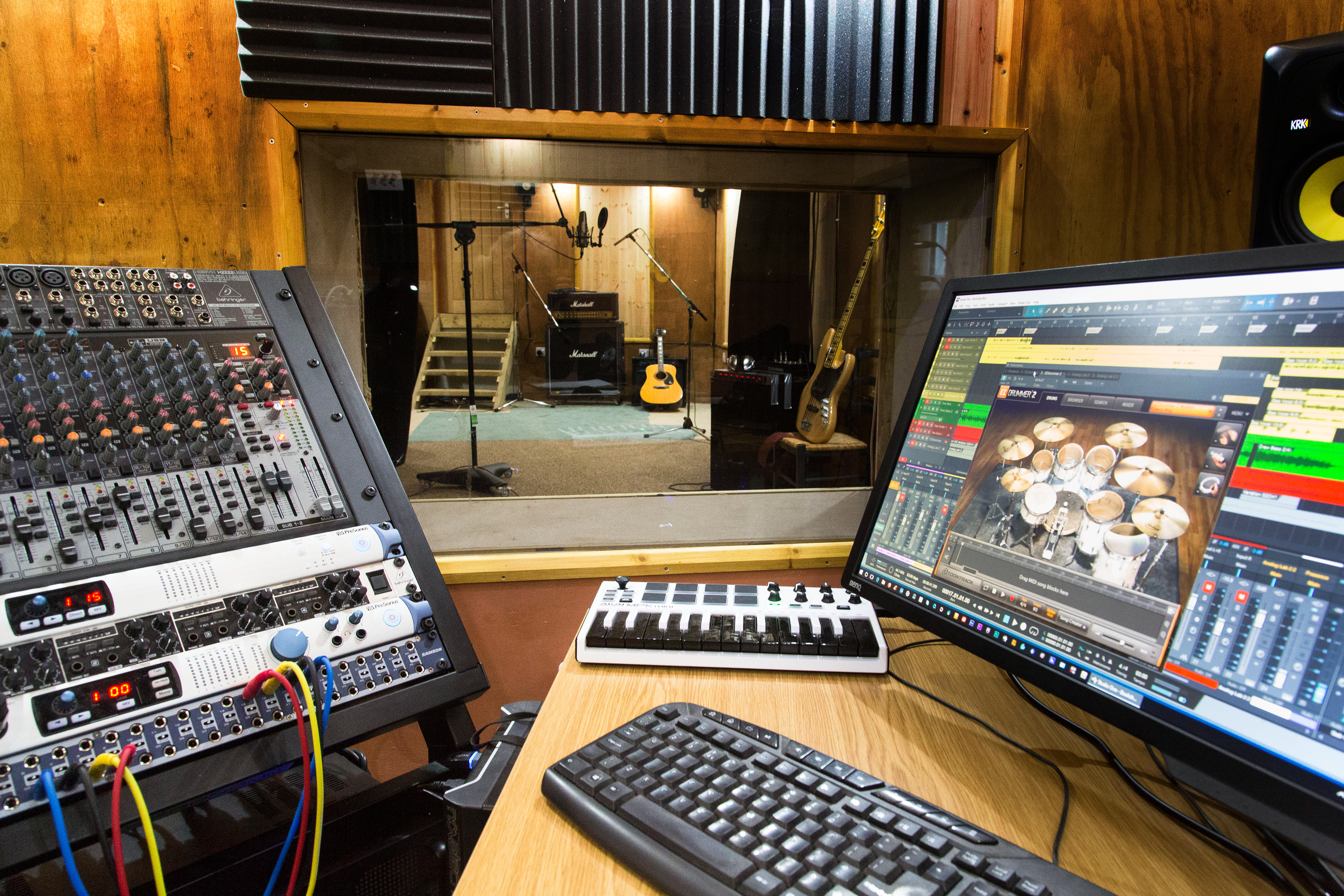 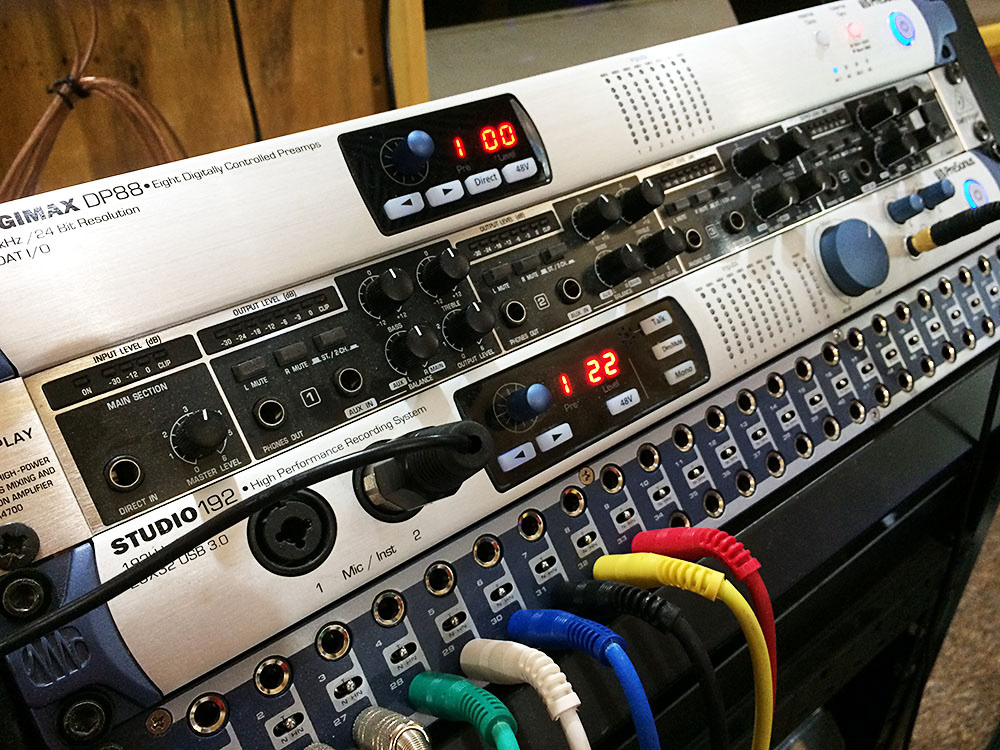 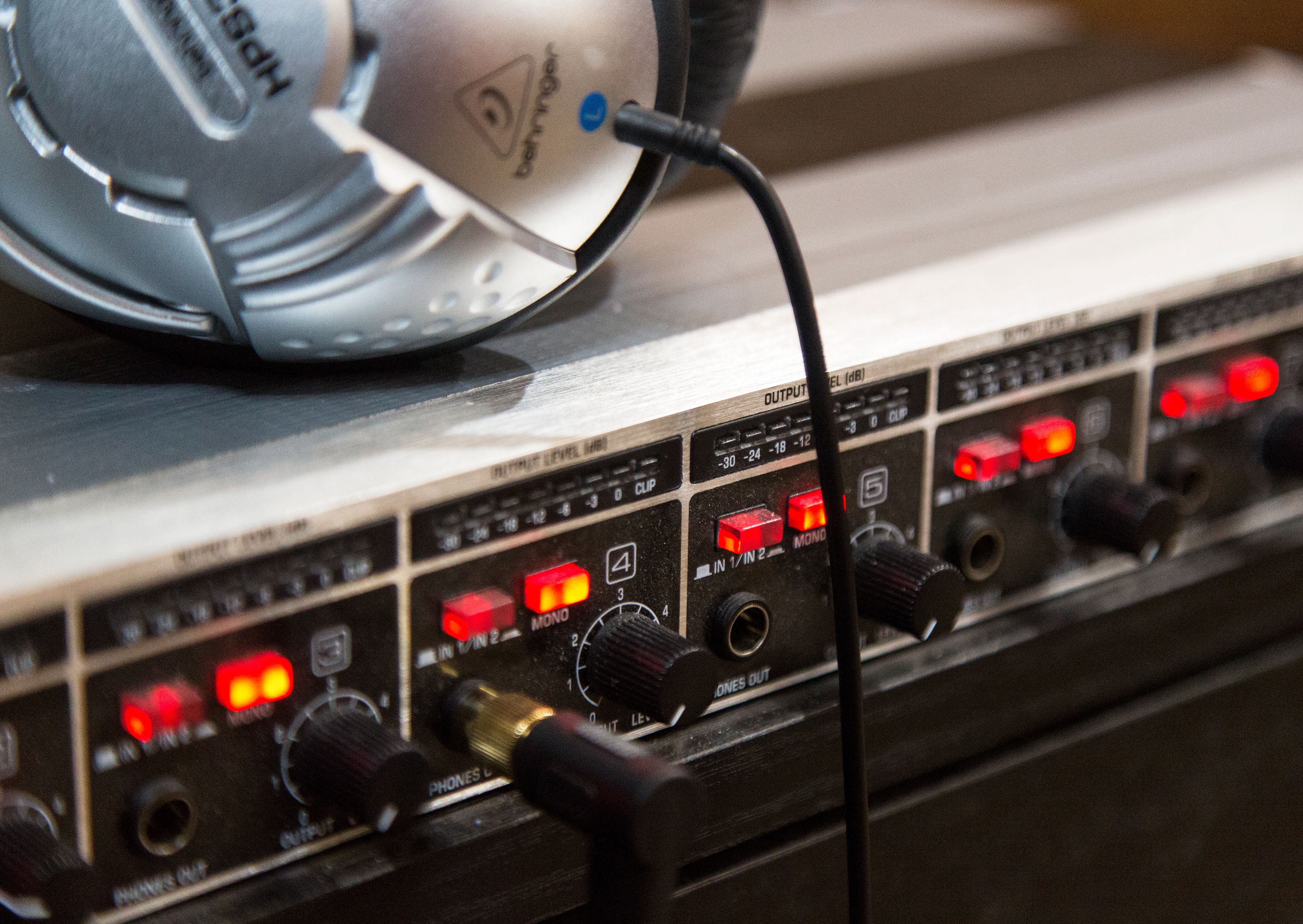 HARDWARE
2 x Presonus 8-channel interfaces, making a total 'single take' capability of 16 mic channels, with plenty of DI if required. We can 'track' performances ranging from a single singer/player to a full band playing live. The number of tracks you can record is unlimited so there's no barrier to what you can do (except it becomes harder and harder to 'keep track' of what's happening ;-))
The setup provides 16 outputs too, so there's lots of choice for foldback, talkback, multiple speaker control, etc.
We have two headphone amps. In the control room is a 4-channel Behringer unit that feeds the rest of the studio. In the studio itself is an 8-channel Behringer unit feeding two separate signals to up to 8 headphones. As well as general purpose 'phones we have a high-isolation type for drummers!
Our DAW is the Presonus Studio One (currently V 3.5) which runs on a i7 machine equipped with two SSDs, 32GB of RAM and three multiple TB hard drives. Studio One 'talks' directly to the two 8-channel interfaces which support Presonus' unique FAT-channel concept by which input processing (EQ, compression, etc) is handled in the interface hardware itself, giving genuinely zero latency signal paths (which means no delay in your headphones!)
Studio monitors are currently KRK Rokit 5Gs and Alesis 3s but these are soon to be added to. We also have various gizmos, such as a SansAmp module for Bass Guitar DI. 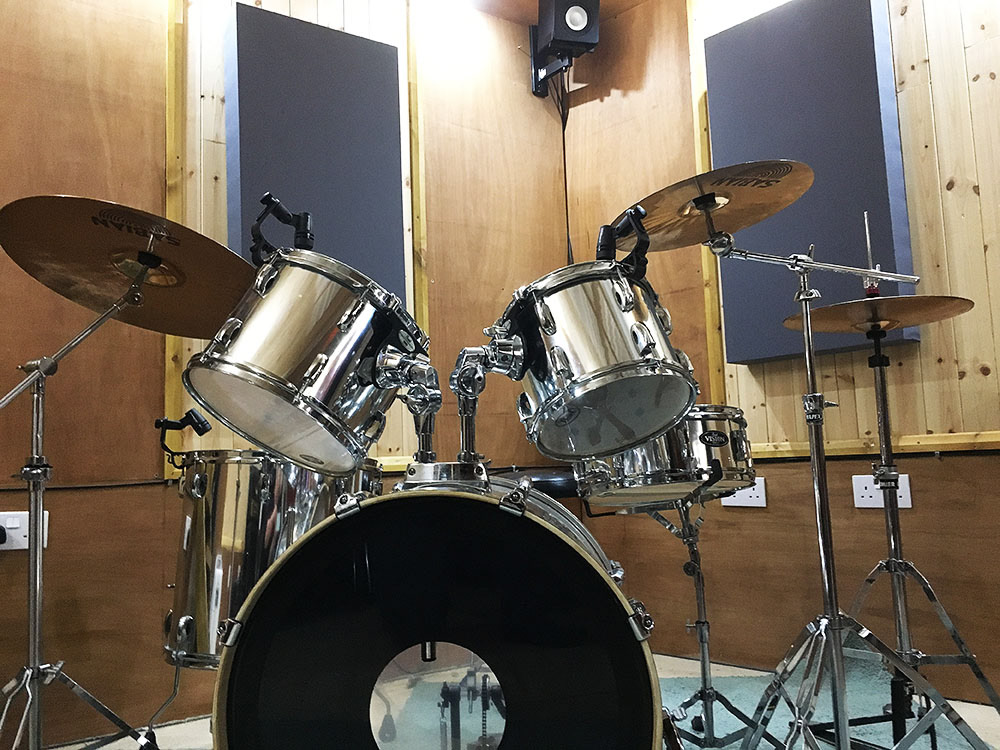 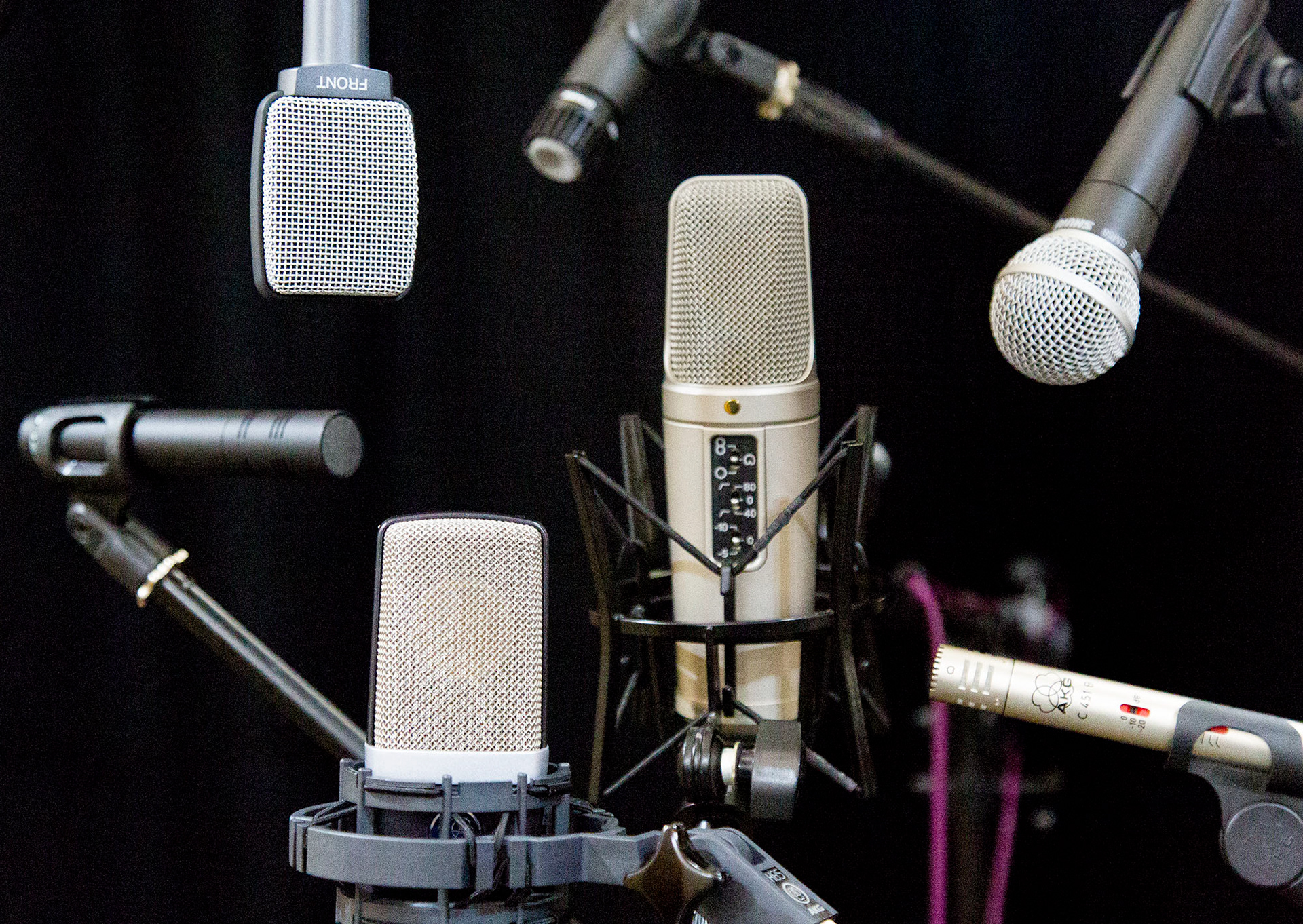 DRUMS
A Pearl Vision set is permanently available, including a 22" bass drum, three toms, hi-hat and two cymbals. These are ready mic-ed and are the most convenient and quickest way for a session to get going. Bring your own snare+cymbals if you prefer, or even your full set.
AMPS
Several amps and cabs are available, including a Marshal 4x12. Bring your own head!
We also have a Koch Studiotone XL all-valve amp that's a joy to work with if you like analogue overdrive.
MICROPHONES
Shure SM57s, SM58s, BETA 56As
Beyer M201s
Rode NT2A, S1, M5s
AKG C451s, 214s
Sennheiser E604s, E609s 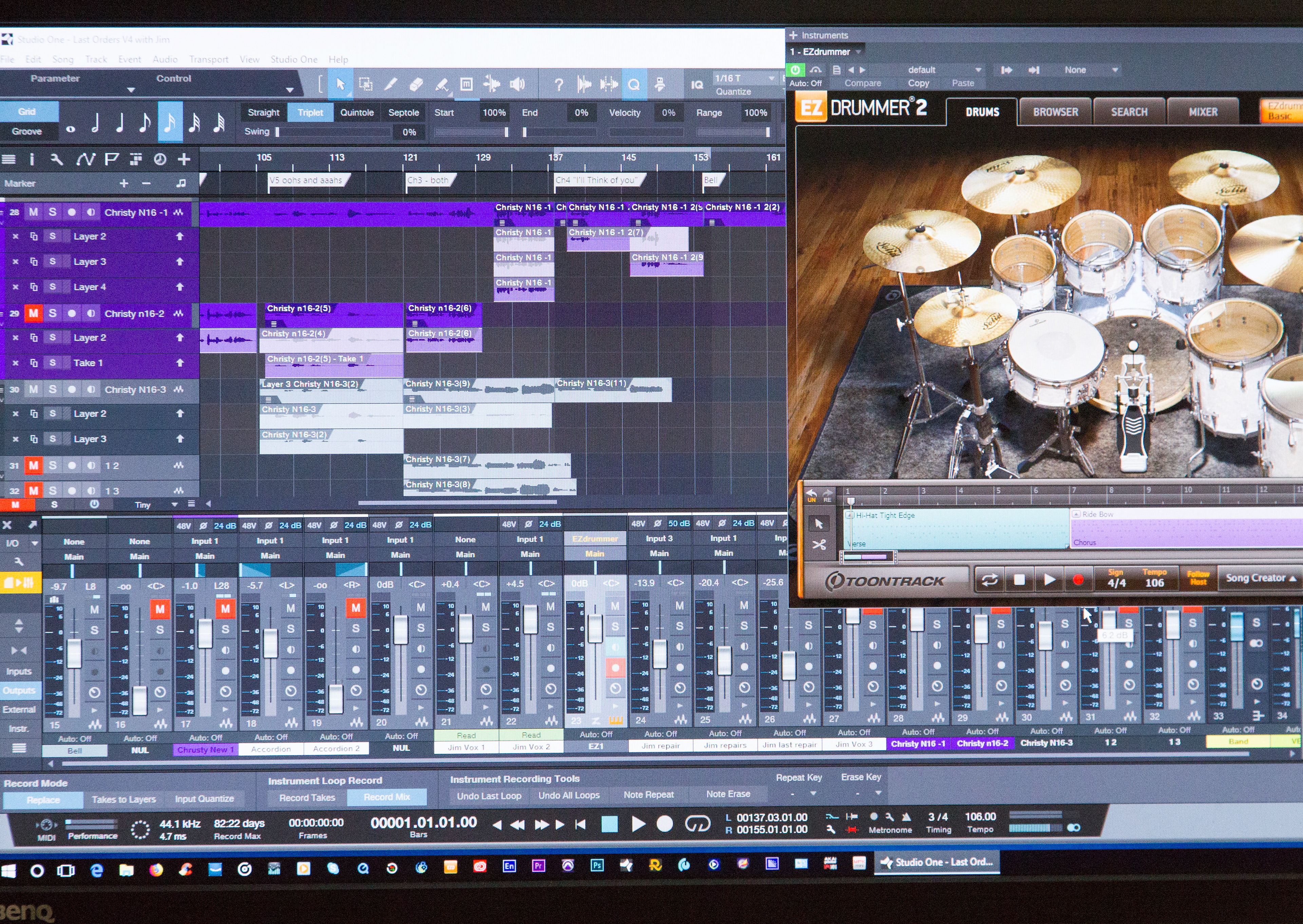 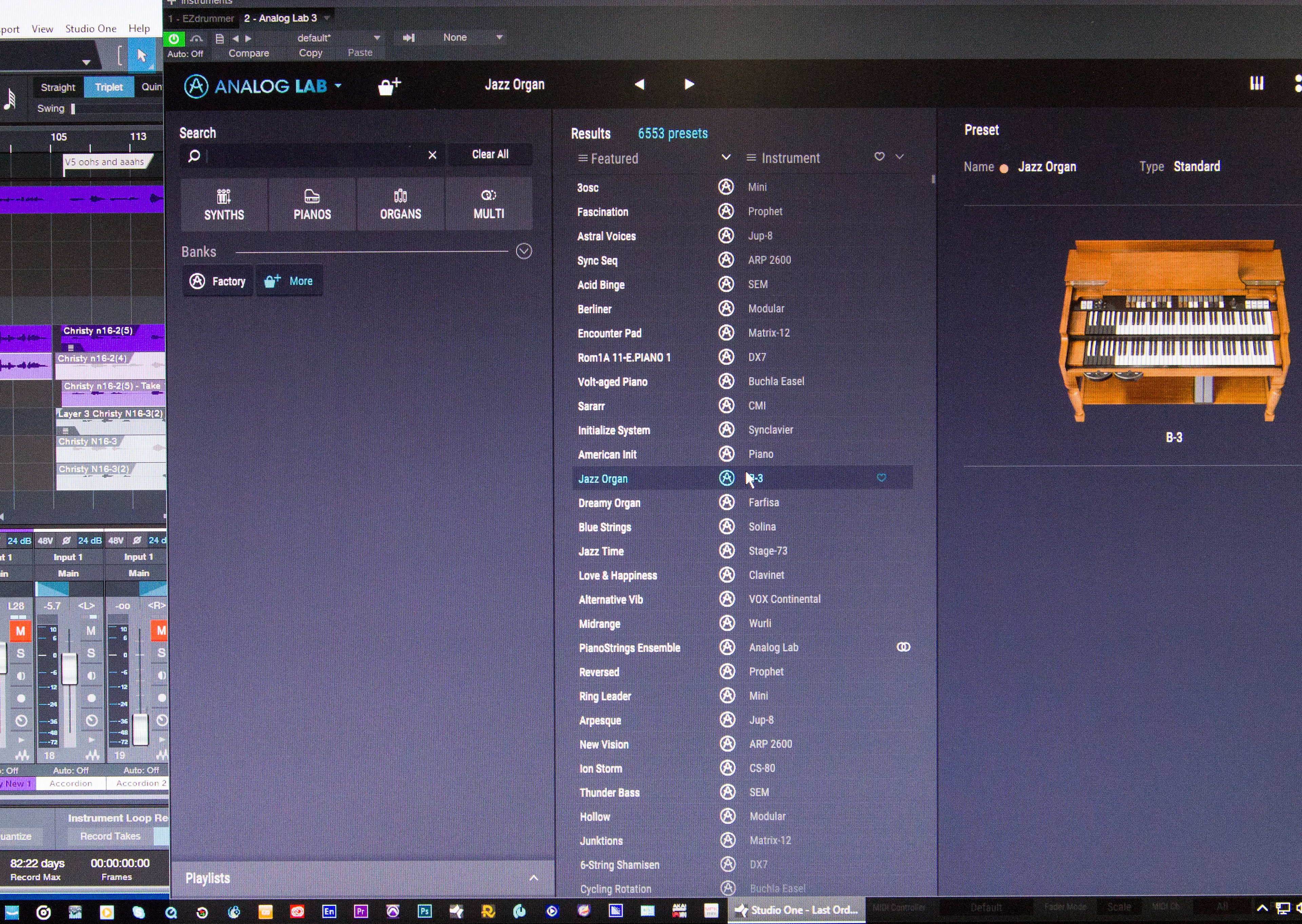 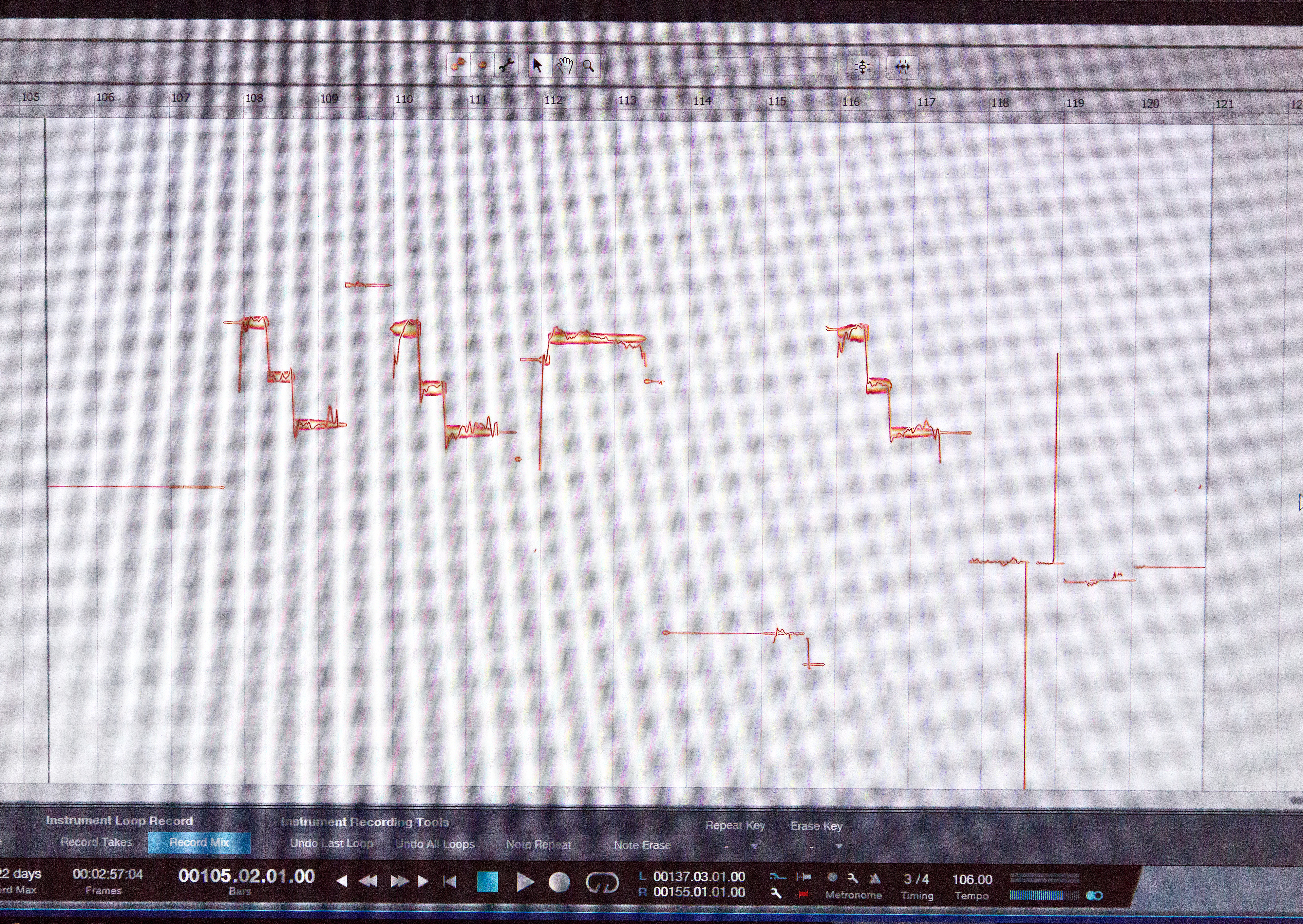 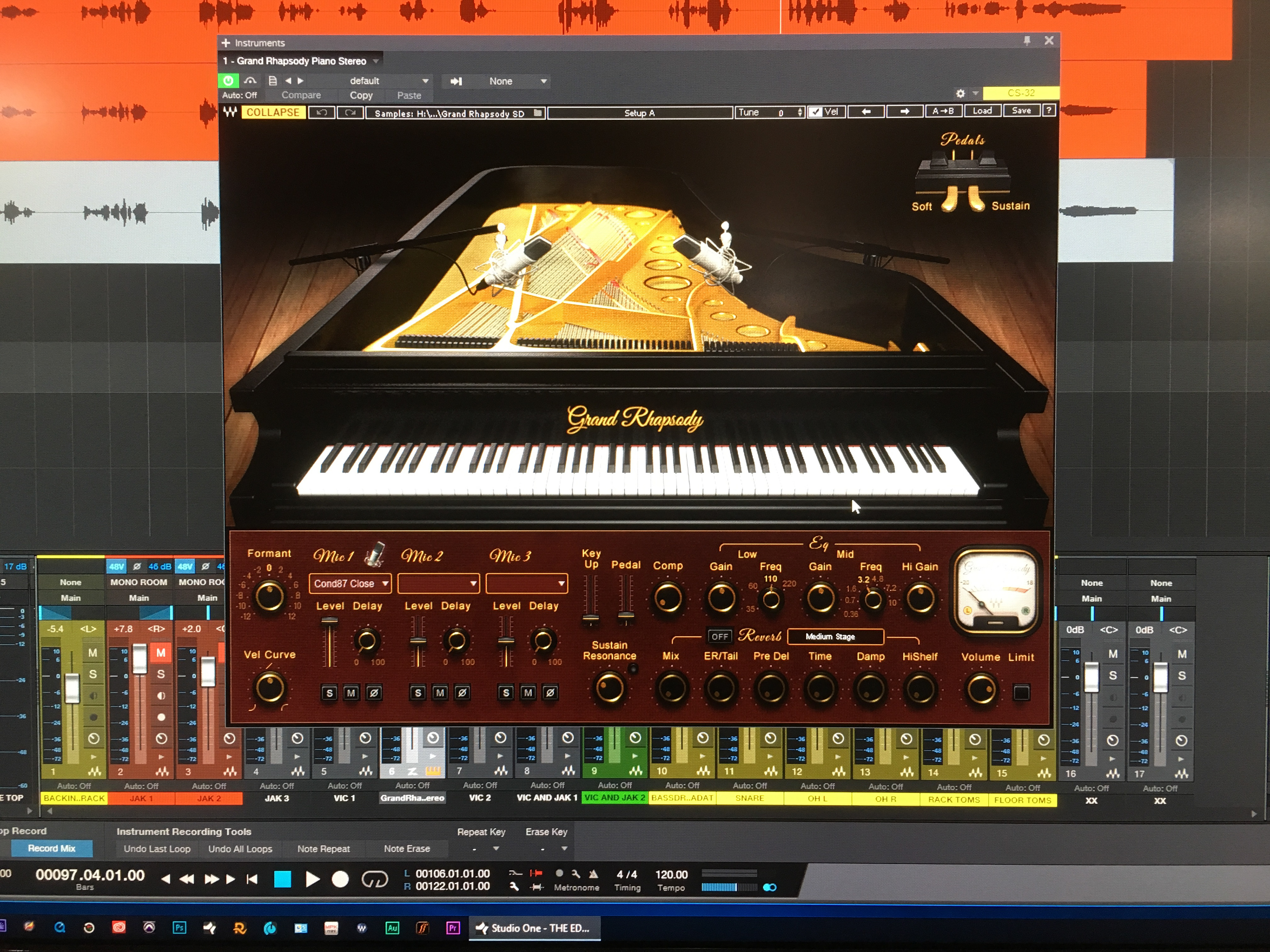 SOFTWARE
Standard audio software effects include all the usual stuff like reverb, delays, overdrive etc. We have a (gorgeous) MPX verb and the (superb) H-Reverb, that can deliver practically any reverb or delay type you might need. We're proud also to have Abbey Road Plate verbs - nothing but the best at JPS!
MIDI Instrumentation includes Analog Lab 3 (top right), which boasts over 6000 samples covering more or less every piano, organ and synth sound you can think of.
We also have a Grand Rhapsody Piano Virtual Instrument, based on real pianos at the Metropolitan Studios in London (think Adele etc.). This is an extraordinary instrument - even when played with a simple MIDI keyboard - and it can add a serious level of professionalism to piano parts. It offers variable mic-ing options (including key and pedal noises if you want). With an 88-key weighted keyboard you really cannot tell the difference from the real thing.
Most important of all we have Autotune and Melodyne correction apps (see image, bottom left). Autotune is especially useful because it can be used in real time. If you overdrive it also delivers the (in)famous 'Cher/T-Pain' effect that, used sparingly, can add much to a song.
We also have a great virtual drummer called EZDrummer (see floating window above left). This can do anything you want via MIDI so all the percussive sounds in the universe (from shakers and clapping to full drum kits) are to hand, either in sample format that can be dragged and dropped into a song, or manually controlled via a keyboard. It has a great set of pre-recorded drum sequences that can be brought together in blocks of 8 and 16 bars to build a real drum track. If you have an electronic drum set with MIDI I/O, you can 'play' any of our drum sets. These include a range of modern stuff through to vintage Southern Sound Gretsch and Ludwig kits sampled at Memphis studios.
↑Back to Top